It's been a while since I got around to writing on the subject of the Mary Lobb Collection discovered at The National Library of Wales some five years ago now. For those that are new to this story you can catch up by reading my article in the Library Journal HERE, and maybe some of my earlier blogs on the subject.

Last year, 2017, I helped curate an exhibition at Kelmscott Manor. While this was running I was invited to a meeting called by researcher and author Jan Marsh who had recently been in receipt of an interesting little collection.The purpose of the meeting being to look over the materials and discuss where the archive should end up being housed.  I'm never that keen on the train journey from Aberystwyth to London, but obviously I accepted the invitation!

Around the table in a small meeting room at The National Portrait Gallery, there were, aside from myself, several interested parties from other museums, archives and galleries. With all introductions made, we all delved in to the little box of treasures. Out came bundles of letters, some from May to her mother and sister dated 1913, photographs and postcards from various places including many from Iceland, and 14 hardback sketchbooks in which May had written accounts of the travels she and Mary Lobb had undertaken.

The texts are written in diary form, an entry for every day, illustrated, here and there, with little sketches and watercolours. May's descriptions are detailed and full of atmosphere and humour. In places she has written out conversations between her and Mary in script form using MM to denote herself and MF (for Mary Frances) for her companion, and some of these make very amusing reading.

I was drawn to the journals relating to the trips to Wales, one of my aims being to see if we could connect any of the material in MF's collection at NLW with the narratives, but it was to be some time before I could read any of them in their entirety. The final decision was that the journals, photographs and postcard would be housed with The Society of Antiquaries of London who own Kelmscott Manor, and for now they are held at the society's offices at Burlington House in London. At present they are being worked on by Dr. Kathy Haslam who, with the kind permission of S.A.L., allowed me to have a read of the first of the journals to be transcribed. 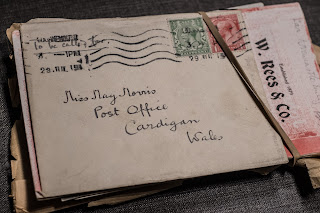 As it happens, the earliest journal relates the ladies' very first camping expedition, which was to a little cove on the west Wales coast near Cardigan, in the summer of 1919. The two arrived at Cardigan, by train on July 29th. After spending one night in the town of Cardigan the ladies were taken, by horse and cart, along the coast to Mwnt. Much of their gear had been sent in advance, though the main tent pole had somehow never made it! A replacement was soon acquired and then, “ Up to the farm-road, then down to the cliff, and there we are, at liberty to pitch our tent where we please…”

They had come well equipped. Two stoves, one, which had been given to them by MF’s mother was a roaring Primus which, to May was, “An unholy terror.” She was much happier with her own little oil stove named Beatrice. Several of the implements have friendly names, including “Brownie”, an enamelled saucepan, and “Kruger” a useful lidded jug. They dined well on local produce -  fish, lobster, rabbit, and vegetables from local farms, mushrooms picked from the fields around them and salted bacon which they had brought with them. MF was responsible for most of the cooking using “Primus The Terrible”, but May was fond of sitting and making girdle cakes around her smoky driftwood fire.

Their bedding consisted mainly of sacks filled with straw and led to the first night being, “a night of agony” until they had been re-organised. The second night wasn’t much better with the tent leaking in some squally Welsh weather. The wind battered the tent on a number of occasions  and, “The thing flapped and thundered, our oilskins, hung on shoulder hangers attached to the pole bobbed and swing like ghostly mad things…” Though the weather was kinder some of the time, often allowing them to take their morning bathe, “..Undisturbed, lying on the fine sand and letting the waves ripple over us.”

They weren't as secluded as they had hoped, with locals and holiday makers alike, flocking to enjoy the last of the summer weather at the beach. At one point MF considers making a few pence by boiling kettles on Primus for picnickers at 2d a go! At the end of one day May says, "I'll have to take a stick and collect all the paper 'the people' have left and burn it. The place looks squalid with their remains." How she would have hated the amount of plastic found on so many beaches these days.

The month was spent exploring the area, cycling or walking miles up and down the coast to Aberporth, Tresaith, St Dogmaels and Gwbert. There was a day trip, by car, up to Aberystwyth, stopping along the way in Aberaeron and making a detour to Devil’s Bridge. May describes Aberaeron quite favourably, not so with Aberystwyth, which she describes as  “…Unspeakable - crowds of aimless holiday-folk, each one looking more bored than the last.”


They spent time with the families in the nearby farms, Fynnongrog, Clôs y Graig and Crûg and had many visitors to the camp, curious no doubt about the strange English ladies. Youngsters from the farms, would sometimes bring gifts of mushrooms, milk, honey and other produce with them and then stay to talk over girdle cakes, sweets, cigarettes and Turkish coffee - May had brought along her coffee making kit!  Some of those youngsters would have gone away buzzing!!


One day, Joshua Evans from Clôs Y Graig,  having heard that the ladies "knew about machinery", turned up at the camp asking for help with his Fordson tractor, which was pretty hi-tech for the time. May explained that she really couldn’t tell one end of a tractor from the other and it would be “the other lady” he’d be wanting!  Up to the farm they went and MF worked her mechanical magic. Before long Mr Evans, who had lost an arm in an accident when he was younger, “…Was careering on the Fordson down the slope at a pace that made me gasp, as it looked as tho’ he were making straight for the deep.”

Of course, camping always has its stressful moments and there were a few tiffs between the two. May recounts one example of her "Peppery Welsh temperament" being aroused after MF, in a grumpy mood, makes disparaging comments about her driftwood fire, ending in May angrily throwing a saucepan full of vegetables into the bush, as MF stomps off in silence. Another example is presented in script form and concerns MF's use of various crockery to keep her precious sea shells:

Scene: Outside the tent. MM touching up a sketch, MF seated in a camp chair with her back to MM.

MM  What are you doing M?

MM cranes her neck and looks. (disgusted) Oh those smelly old shells! Why must you spend so much time over them?

MF growls You go and make your smokey fire and leave me alone, can't you? My shells don't harm anyone.

MM I looked for that bowl everywhere last night! Besides, they smell.

MF  Well you're not leeward of me now anyway...

Then to May's continued annoyance, MF proceeds to fill another large bowl with hot water and more shells!

Mwnt has always been a popular spot. The little 14th century church has been a favourite subject for many an artist over the years. It was May’s painting which first alerted me to the fact that she had spent time there. I’d suspected that other paintings in the collection were also painted around the same stretch of coast, so a trip to Mwnt was in order.

One thing I wanted to do was to see if we could find the actual location of the campsite. Unlike a lot of their later expeditions, they don't seem to have brought a camera with them so there is no photo of the tent. We have May's descriptions - "...up a pleasant valley, decked with a musical stream.."  She often mentions how the tent is on a slight slope, and there are various other references which led me to suspect a certain area. Also, although we have no photos, there is, on the reverse of a small watercolour of the church, a very rough sketch of the tent in its surroundings. Along with May's descriptions, this made it possible to pinpoint the very spot. 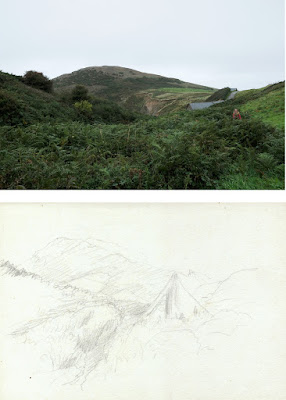 The place is very much overgrown, making it somewhat difficult to fight through the wet bracken and brambles, but overall very little has changed. We're fairly certain that just to the left of where Kathleen is standing was where the tent was. The little stream is hidden by the undergrowth but still babbles its way down to the beach. The buildings in the photo are modern, built by The National Trust.

I can't be 100% sure about this one last picture but I am fairly convinced (say 98%!) that this is Crûg farm.  "The old house stands enclosed L shaped, making a pleasant square inside the stock-yard - old gray slates and the nice dormer windows..." May mentions sketching it and returning later to paint it, while the children of the family there played with MF ".. as though she were a friendly Troll."

This was the first in many camping expeditions. We know May returned to the area again, though as yet, I have seen no evidence that they camped at Mwnt again. With all the sleepless nights due to vicious weather, fear of snakes, "...all the Daddy-long-legs and startly-boos and snails..." invading the tent, and other wildlife making off with their dinners, its a wonder they ventured out again, most other women of the time certainly wouldn't. But these two were no ordinary ladies.

Quotes from May Morris' journals by kind permission of The Society Of Antiquaries Of London.