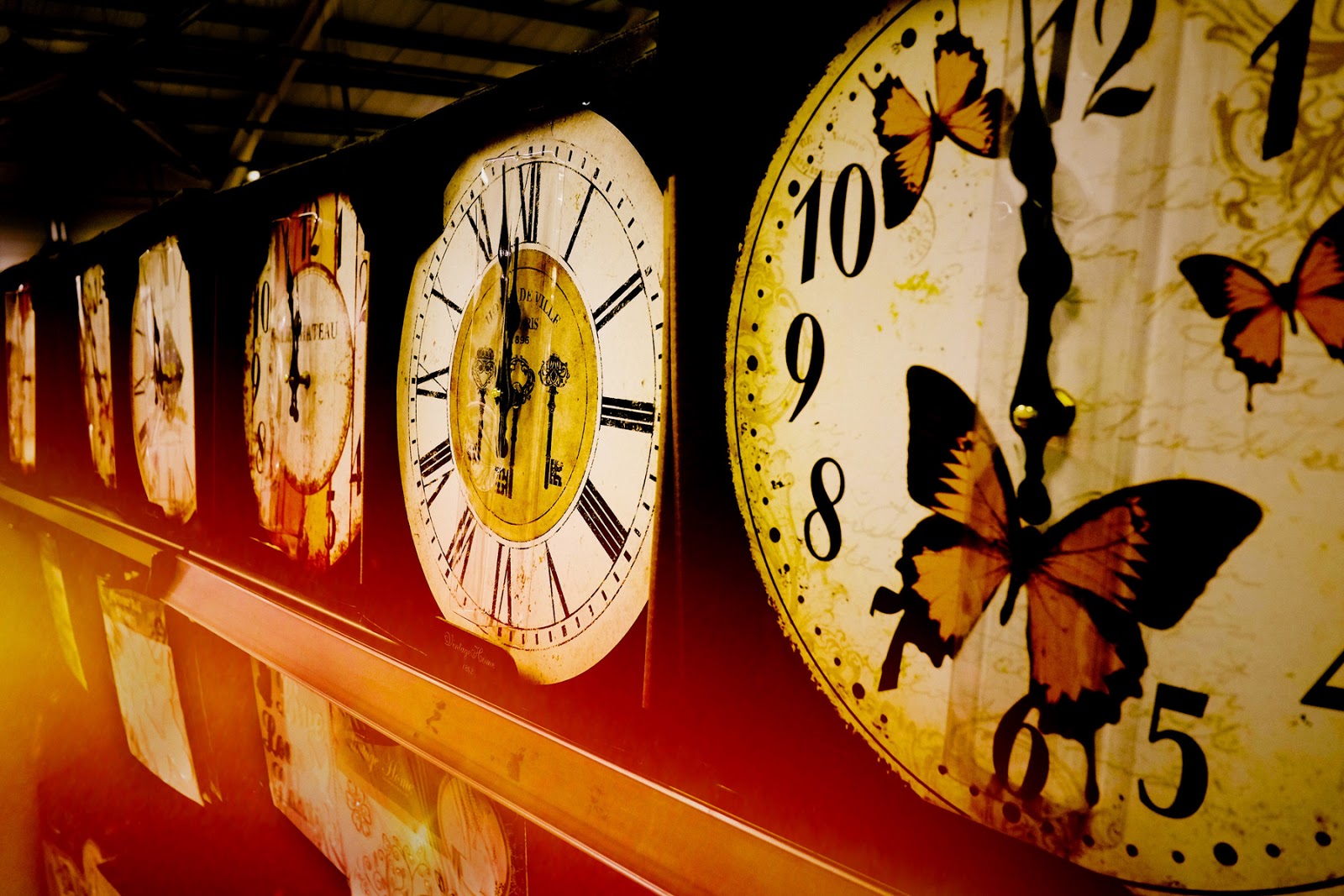 This year, 2014  is the third time I have done 365. I had a break last year, 2013, but did 2011 and 2012, and I have to say that this is probably the last time I'll do one of these! It's become a little addictive, almost, in a way, stressful. Don't get me wrong,  I have, overall, found it a very rewarding, and I would encourage anyone who has thought about doing it, to give it a go. Many people will ask, and indeed, have asked, why?! What do you take, just anything? What are you going to do with them all? What do you get out of it?

Well, for starters, it's an exercise in self - discipline. It would be so easy, when the going gets difficult, to just not bother. It's a good way to learn how to look around you, to see everything from sweeping landscapes to the most mundane objects and capture them in different ways. You can end up with something both very personal and accessible to others.
A project like this hones your technical skills too. Constant handling of cameras means the equipment is that much more familiar to you. Photo editing skills improve. And, not least, it forces you to face the issue of safely storing a huge amount of data!

For me, it all started back, in 2010, when a few of my colleagues at work and I, tried just a month's worth of daily images. Though it has to be said, and I don't remember why now, but I missed the very first day! After that though, I never missed a day, always taking the shot, even if I couldn't post it up to Flickr. I found I quite enjoyed it, and I did 5 MONTHS in the end, a month on and a month off from April onwards, then straight into 2011 and 2012.

From the start, I decided not to go with any particular theme in mind. There would be the occasional series of related images like the "Things on my shelves" in 2011, or "Doorways" this year. As it happens, 2011 was an eventful and quite emotional year for me. I moved away from my secluded hilltop dwelling which I had inhabited for nearly 25 years, and The Lovely came into my life. Looking back, I think this project was a great help in keeping me stable, quite therapeutic. It is a superb record of a key year in my life, but at the time, all I was doing was "getting my shot of the day". It was only afterwards, when I looked back at the whole sequence that I could see it's real worth. And I think that has happened every year - I struggle to get through it at times, but at the end, I'm rather pleased with it all.

Technically, I wasn't always that worried about hitting a high standard of image quality in every shot. It seemed to me that an image was an image and that I got what I got. I used my DSLR, compact cameras, and even my phone. A few years ago, the cameras on most phones didn't produce the best of images, but I got to quite like the lo-fi approach, depending on the subject. I think sometimes we get a bit hung up on pure image quality and too often throw out an image by judging the quality over the content. Though, as I have already mentioned, your technical skills improve immensely over these years, so you end up with more and more technically good images.

But, what about the "What do you do with them all?" question?  Although it's all out there in Cyberland,  I must say that it feels like I'm not making the most of such a huge body of work. I am drawn towards producing photobooks. The cost will be quite high, but I think it's the only thing to do. I really feel that I should bring those digital, virtual images back into the real, analogue world. I work with photo archives, many of which are in the form of photo albums, some dating back to the very earliest days of photography. There is still something wonderful about the physicality of a photo album, or prints in general really. Producing and mounting 365 prints in an old fashioned album is pretty impractical, whereas, the photobook offers a little more flexibility in layout etc.

So what will I do this year, without this project? Well, find something different is the answer! I'm sure I will continue to take photos on most days. I may return to some kind of video project. In 2012, as well as doing the 365 photo, I also did a 3 SECONDS A DAY video challenge... But that's a whole different story.....
Posted by Evans The Blog at 18:32 No comments: 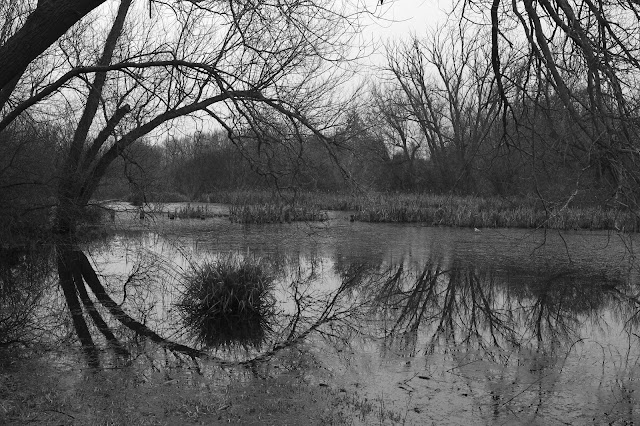 Boxing day dawned a lovely bright frosty day.  We were spending the holiday in Broxbourne, at The Lovely's parents place, and there had been much consuming of food and drink. I needed a good wander to stretch my legs and take some pics.  I was admiring the reflections in a pond along which a boardwalk ran. There was an old man, around 70 or so, walking a Golden Retriever, chatting to it as he went. I later found out that his name was Mr. Bufton, a retired secondary school teacher.  Hearing him chatting, I looked up, caught his eye and he approached. "Are you admiring our nice little lake?" He asked with an emphasis on the word " nice" which hinted to me that he didn't actually find it that nice at all.
"Just looking at the reflections here, " I said, waving my hand in the general direction.
" Ah, not from the council then?"
" No," says I, " From Wales."
"Well, you have lots of water there too then."
" Oh yes, plenty of that!"
" Well, this used to be a fine meadow, full of flowers you know." I sensed a little anger and frustration in his tone,  " And look at these trees, here, and over there," he continued, waving his walking stick in various directions, " they're all dead or dying now."
Looking closer at the scene around me, I could see that many of the trees have their roots in the waterlogged ground and they are indeed dying.
"So, how do you think this happened then? " he quizzed.
I was trying to formulate an answer, speculating that maybe this was the natural way of things, after all the place is in a river valley, next to a river, lots of water. However, just as I uttered my first syllables, he began to answer for me, pausing occasionally for the clattering trains to pass. 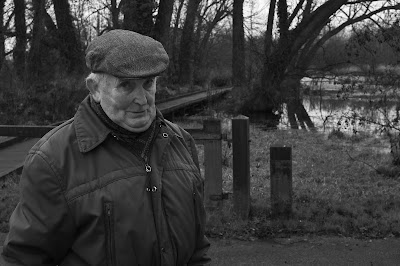 The story was a complex tale of accident and incompetence involving all the authorities of the area - Lee Valley Park, the local council, the Railway the Rivers Authorities. It seemed that Mr. Bufton was not overly fond of the local council,or the Lee Valley Park Authorities. As the affected area filled up, it was referred to as the creation of "diverse habitat". But, the fact is that there are acres and acres of wetland habitat all through the Lee Valley, and what had once been on this site was probably far more important. Also, because this has just been allowed to happen, uncontrolled, every year the water encroaches more and more on the car park nearby.
As he talked, I prepared to take a photo, and when he paused I asked if that was ok.
"You should take a photo of this dog of mine." he said, and I stood back a little trying to frame the shot.
" If you make a noise like biscuits, he'll smile for you," I was told, but was a little stumped as to what noise to make - what is the difference between the sound of a Digestive and a Custard Cream?! I made a vague clicking noise and the dog did seem to pose nicely. 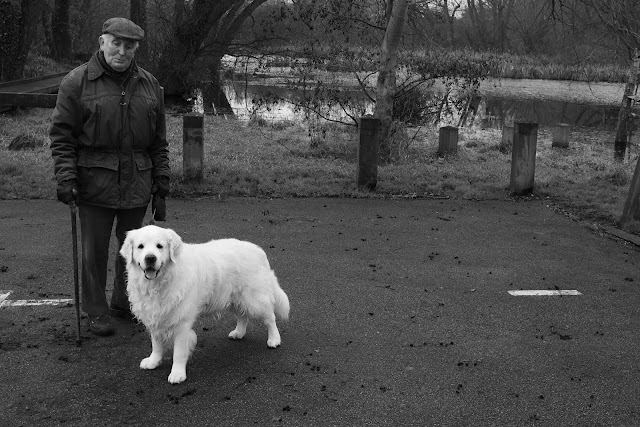 "Of course I normally charge for that you know."
I laughed, but was answered with an almost stern expression, "No, really," he said, " this is the cleverest dog in Hertfordshire, been tested against five year olds."
Now it was getting interesting.

Mr. Bufton looked around, and spotting another dog approaching told me that it might be distracting so we had to wait a moment, then the old man addressed the dog. "Mitch, find your voice" he said and the dog barked.
Then, with the dog watching him intently he held up three fingers and the dog barked three times. This was repeated with various numbers, then he asked me to just say a number between one and five and every time Mitch barked out the correct number. Then he did sums, addition and subtraction, but always ending up with an answer of no more than five. I was told that he could do a lot more when he has his "equipment", which, I gather consists of various cards that can be laid out on the ground in front of him.
"Oh yes, we've done television, and they put him on the Internet and everything." Mr. Bufton said with a great deal of pride. " He can do some square roots too."
He asked Mitch a question to which the answer was evidently three, but I have to say that I have no idea about square roots. In fact my mathematical prowess probably only just exceeds that of the dog!
Suitably impressed, and with a couple of nice photos, I thought it was time to move on, I was expected back for lunch. As it turned out we were going the same way, so I we walked together a while.
"Of course, you see this walking stick, I don't need it you know. Why do you think I carry it?" Mr. Bufton asked, but he answered for me again, "Well, vets bills are expensive you know and some dogs are so aggressive, Staffordshire Bull Terriers, they're the worst, and I use this stick to fend them off, damn things."
I nodded in agreement as we approached the spot where we part ways.
"And you'll notice I have a very long lead here," Indeed, I had noticed that he had one of those extendable, retractable leads, "Well, you see, Mitch is learning to fly...."
"Ah....I see..." I said scanning Mr. Bufton's expression for a clue as to whether he was having a laugh - seemed perfectly serious.

"This lead will stop him getting too high and getting caught in the trees. But there are quite a few people and other dogs around, " he said and then, addressing the dog, " so no flying for you today!"

Now I wondered - loon or master of deadpan humour? There was a glint in his eye that made me think the latter.

"Yes," I said, " a bit cold up there for flying today, and it'll only make all the other dogs jealous..."

At that point we said our goodbyes, but I was rather glad I’d taken the time to chat with Mr. Bufton and Mitch the Mathematical Mutt.
Posted by Evans The Blog at 18:12 No comments: