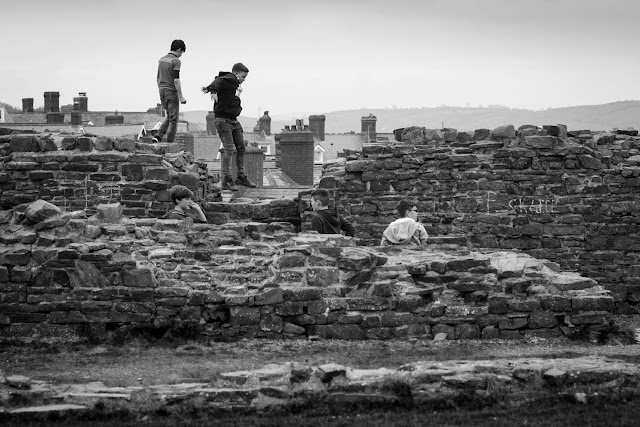 Having just taken delivery of a nice new lens, I set off to give it a test run. My random route around town brought me to the castle. I often find myself passing through the ruins and today it was quite crowded. There were several groups of youngsters, mostly aged around 12-13, possibly a bit older, I'm not known for my accuracy when it comes to guessing ages!

One or two of the lads were taking large rocks and slamming them against the walls in an attempt, I think, to impress the gaggle of girls standing nearby. They climbed and jumped, shouting insults at each other and were being generally boisterous. They were being kids.  A mother with a toddler passed me, looked at the frantic activity, then looked at me, then back at the kids again and I wondered if she thought I should be saying something, or if I was in some way connected. I just smiled.

I have to admit that somewhere in the back if my mind, the grumpy old man voice was muttering something about telling them to be careful where they were throwing things and to have a bit of respect for other people who might want a bit of peace and quiet. But then the other voice spoke up and reminded me of what I was up to at that age....there was the time that......oh yes and THAT time.....Probably a lot worse than I was witnessing in front of me, and I suspect I could have ended up with several ASBO's! They were just being kids, and as long as I perceived no actual threat to life and limb to themselves or others, I wasn't going to get involved. The mood was not generally aggressive, and I found it quite encouraging to see kids this age being active rather than sitting down staring at a screen. They weren't there for that long anyway, and soon headed off. 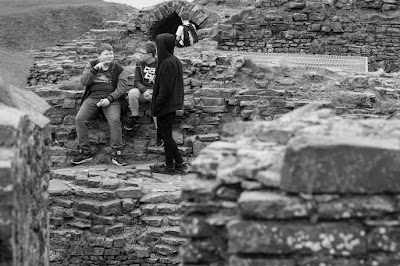 Later, I encountered another group, older this time, the BMX crew. I've often seen this varying sized group racing about town, along pavements, nipping the wrong way up one way streets, doing wheelies and jumps whenever the terrain allows it. I'm sure I show my age by how amusing I find it to see large teenagers riding bikes that seem several sizes too small for them, but I suspect its considered quite "cool" ( or whatever word they've currently usurped to express that concept!). I had a couple of close calls, near misses, as they appeared suddenly around a corner, though it has to be said that I got an apology every time.
"Whoa! Sorry mate!", was the usual offering, quite polite really. 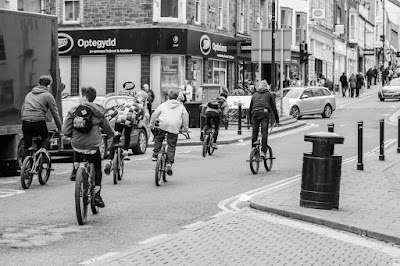 As much as I might smile and just think "Kids will be kids", they were a bit rowdy, possibly a danger to some and there are plenty less tolerant than me, so I kept expecting, at some point, to see at least one of these groups having a talking to by a Community Support Officer. Maybe they did and I missed it, if so it hadn't deterred them any. Then I saw something else.

Now, I can't be entirely sure what had happened. However, the only person I saw being approached by the police was one young black man in a hoodie. He was not part of the other groups, and as far as I could tell, he'd been riding his bike on the pavement. He was stopped, asked to show his face and produce ID. 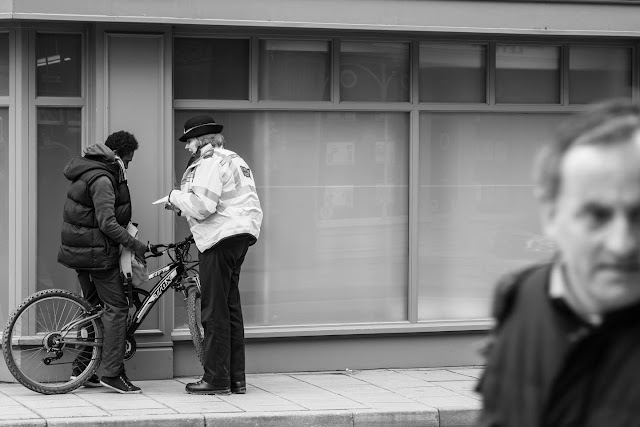 Figures produced last year show that black people are still much more likely to be stopped, questioned or searched than any other group ( just one of many articles on this subject can be seen HERE ).  As far as I could see, this lad had done nothing wrong because he was allowed to go on his way after the CSO had examined his ID. So, was it really necessary? I never want to believe these statistics, surely it can't be that bad, but on just one day, in quiet little Aberystwyth I had witnessed something that seemed, in my experience at least, to suggest that it is indeed the case.