The Peculiar Migrations of Objects 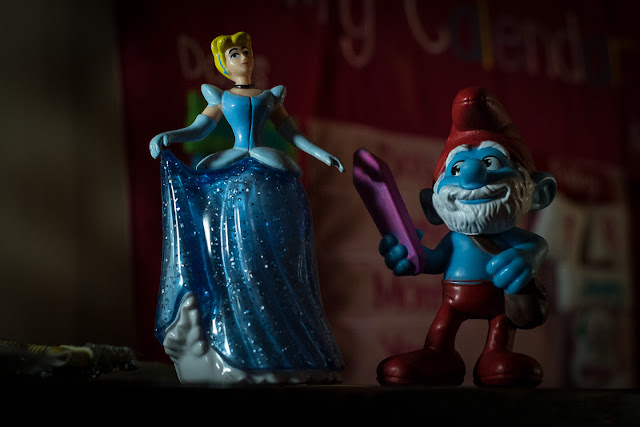 I didn't really give it a second thought, when I told The Small One to "Just leave them there for now." She'd been sorting out her room ( for an 8 year old, I suppose that's worthy of note in itself ) and had found a couple of things she thought should go to the charity shop. Of course, they stayed exactly where she left them, and I only noticed days later how Papa Smurf was eyeing up Cinderella.

I've always been quite fascinated by the way random objects can frequently end up in interesting arrangements. Some things seem to migrate, through various mechanisms, towards each other. This often  happens through the process of "temporarily" putting things down until you can find a better place for them. Of course, it's not long before they're "temporarily" joined by other bits and pieces. As this process continues over time, and the individual items are shoved and shifted, it can lead to the emergence of vaguely aesthetic, usually quite surreal, displays. This is especially true when there are children around.  The Small One, by randomly discarding various items in her menagerie of fluffy creatures, or some of her collection of small humanoid effigies, often contributes to this phenomenon.

Those years in which I did the photo-a-day challenges, I often turned to everyday objects to fill my quota. I think 2011 was a classic year for the "Things on my shelves" series!
It seemed an easy option, especially during the dark, winter months, but I found that I could end up spending ages playing with different angles, lighting or lenses.

Sometimes I would grab whatever was close by, re-arrange them slightly and snap a couple of quick shots. I've also been known to spend hours in Photoshop making more outlandish creations based on whatever is to hand.

But, what I really like is when chance has done it all for me, when I suddenly notice a meeting of objects, like Papa Smurf and Cinderella, that just calls out to be recorded without needing any other interference from me.

Lurking Around The Station 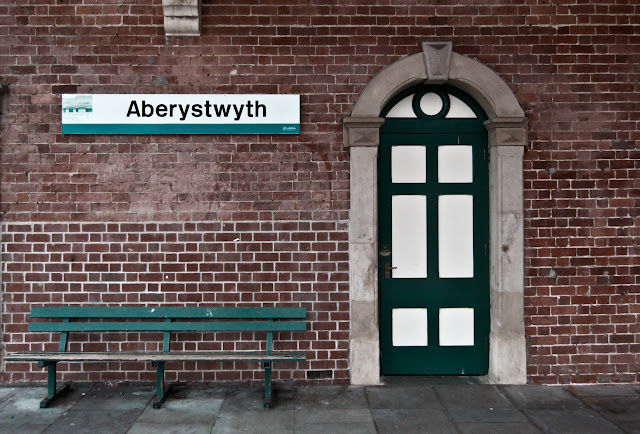 I’ve been lurking around the train station in Aberystwyth a lot lately. I've always liked the atmosphere in train stations. Airports and bus terminals too, have a similar feel. Its humanity on the move.

With Aber being a University town, its population fluctuates in accordance with term times, and the beaches bring the seasonal migrations of holidaymakers. Compared to main line stations in the cities, this one is tiny, but the single remaining platform of the Victorian station is often a busy place.

Sometimes there's the quiet chatting of the local, regular travellers, or the boisterous banter of students, clustered together as they set out on some new adventure together. Next to them, in stark contrast, could be the silent couple, staring into each others eyes, contemplating a reluctant, painful farewell. The angst hanging, tangibly over them.

Mothers and fathers struggle with the family baggage while attempting to rein in excited children or placate exhausted, crying babes. A lone traveller sits apart from the crowd, staring at their feet, and there's often a bright eyed young woman, fidgeting and throwing desperate glances down the track, impatiently awaiting the train that will bring her lover home. Some bury their heads in a newspaper or book, while others, the youngsters in particular, stand, thumbs a blur over the screens of smart phones, texting wildly as music buzzes in their earphones. 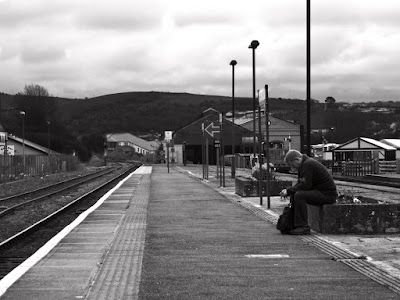 "The train now arriving....", rattles out of speakers overhead, and the train rumbles up to the platform. The crowd shifts and takes on a new shape. Those embarking, position themselves for boarding, the others hold back, trying to peer in through the windows to catch sight of their returning friends or family. The doors open with an hydraulic hiss allowing a torrent of weary passengers, luggage in hand, to tumble out. For a few minutes those embarking mix and mingle with those arriving in a chaotic exchange of position, punctuated with hugs, kisses, handshakes and the occasional joyous shouts. 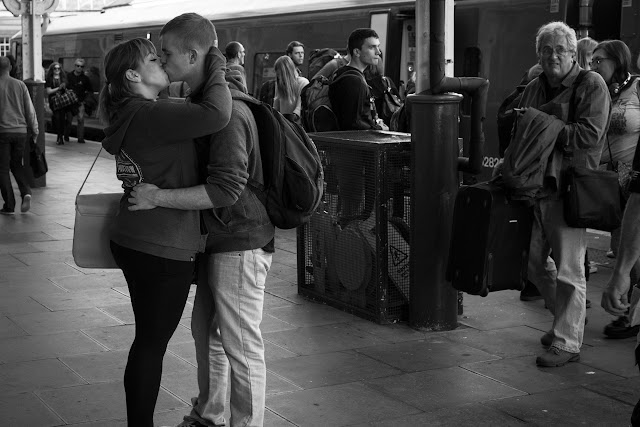 The general murmur of voices is replaced by the monotone drone of the idling diesel engine. The few people left, scattered along the platform, are waiting to deliver their final farewells through the grime blurred windows. Some silently mouthing words, and some, communicating by phone, like a scene from some prison drama. A few latecomers wearing vexed expressions jog up to the train hoping they might still be in time to secure a seat, and then the platform is all but empty. 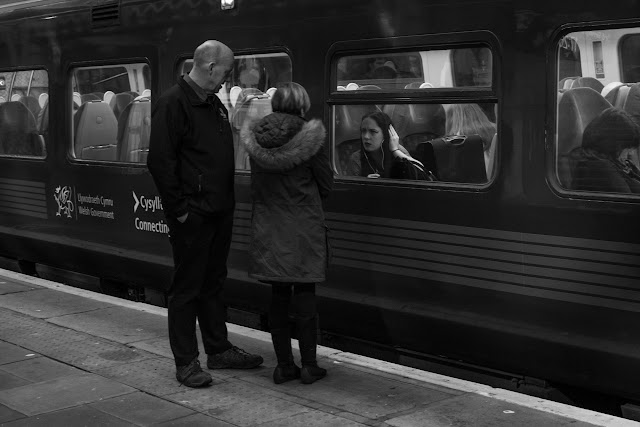 The platform is rarely completely devoid of people, many come to snack under the shelter it provides and it's often used as a short cut on the route to shops and car parks, but even when empty the station holds a certain fascination. There is still a feeling of anticipation there, as though the old walls have somehow been infused with the amalgam of emotions emitted by the constant flow of people over the last 150 years or so. I'm no believer in ghosts, but I do think that places somehow acquire what almost amounts to personality. 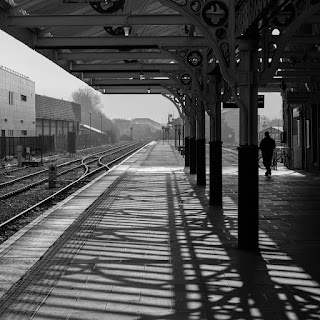 Despite the various alterations and additions to the building, it's retained enough of its original features to remain fairly inoffensive to the eye. The sunlight can create some pleasing shadows as it plays around the wrought iron structure, and at night, the electric lights make their own patterns. 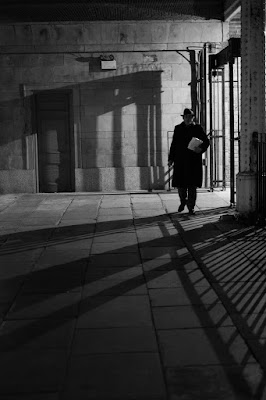 Next time you're sitting in a train, or waiting at the track's edge, and you spot that strange chap with a camera, it's probably me. I mean no offence. I often wonder, as I bring the camera to my eye, if there's someone observing me. Someone else "people watching". We all do it. I try to record just a little of what I see.