I realise that is has been some time since I wrote an update on my research into the wonderful Miss M. F. V. Lobb and the collection she left to The National Library of Wales (see my blogs from October last year) .  I’ve been a bit busy with other things, but I have tried to keep dipping into various resources in attempt to turn up any new information. One of these resources was newspapers. There are now so many digitised newspapers available online that you can search more titles in an afternoon than would have taken months, or years. No more trawling through crumbling, original papers, bound in volumes so large and heavy that one would have to regularly work out in the gym in order to lift them. No more staring, zombie-like, squinting as you roll through miles of microfilm. Now we can search for specific names, locations or any keywords. Admittedly searchable text can have its drawbacks, especially when it’s derived from rough old newsprint, but it’s still a fantastic resource.

I had been hoping to find some more information regarding Miss Lobbs school days. I know she attended St. Thomas’s College, a small, privately run school for girls in Launceston. 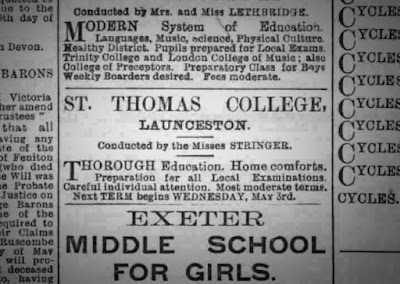 The census for 1891, when she was about 13 years old, shows that she was boarding there with 10 other girls.  I haven’t yet had the opportunity to spend time at any records offices in Cornwall, and I suspect that with this being a private school, I would be unlikely to find any records associated with it. All I can say is that the Headmistress was a Miss Caroline T Stringer and that the teachers included her two sisters, Emma and Alice. The local paper would publish lists of those pupils who had passed their exams, but Miss Lobbs name doesn’t appear on any of those lists that I have found.

As I searched The British Newspaper Archive, by chance I stumbled upon a couple of letters to the editor, written by Miss Lobb, to The Western Morning News. 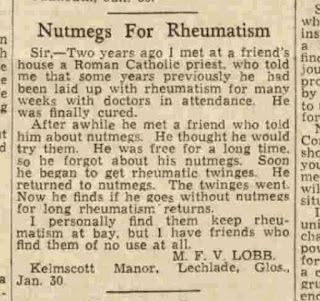 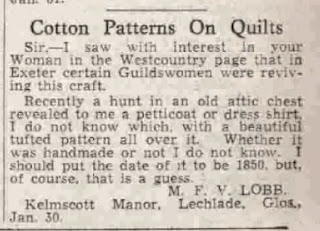 When I first read them I thought them to be rather amusing, absent minded ramblings. Then, noting the dates on the papers, they suddenly seemed quite poignant. They were both written in that time between October 1938 when May Morris died, and her own death in March of the following year. She was alone at Kelmscott Manor through those dismal winter months feeling, I think, very lonely indeed.

There is one other find made at The National Library of Wales worth mentioning. Just after I delivered a talk last January, in The National Library, an ex curator, retired for some years now, approached me and asked if I’d seen the dozen or so pages from the Kelmscott Press Chaucer, printed on Vellum, which had been sent to the Library by May Morris in 1926.  Well, no, I hadn’t seen these items!  They weren’t to be found on the catalogue. The old curator remembered where they had been kept, but of course increasing demands on the limited amount of space in the building, they had long since been moved.  It turned out that they were considered ephemera of sorts, and, with the help of several members of staff, I eventually tracked them down. They were accompanied by correspondence from May Morris to the then Chief Librarian.  I intend to say a little bit more about this find in my next talk on September 26th at the William Morris Memorial Hall in Kelmscott, but here’s just a little peek for now! (Fear not, I’ll write here in more detail at a later date for those unable to attend) 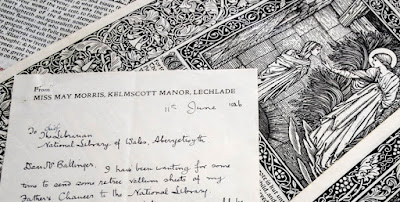 Before I finish, there’s a point that I feel I should emphasise. Sometimes things slip through the net of the cataloguing process, and without a good number of knowledgeable, experienced staff, these things could remain hidden for a long time. Not only did the old curator know where they were, but also understood their significance. Sadly, due to financial restraints, repeated re-structuring, redundancies and retirements, we are losing many people and with them, their knowledge. We live in difficult times and I’m sure this is happening in most similar institutions all over the country. We must all do our best to curb this. We need to stop discarding those with specialised knowledge and expertise in favour of layer upon layer of managers who have little or no comprehension of what those experts do. We will end up with lots of big buildings full of amazing things, but there might not be anyone left who can tell you what the things are.