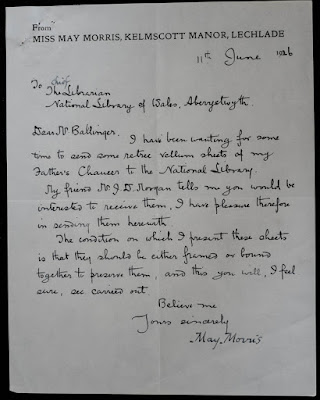 I briefly mentioned in my last blog on this subject, the Vellum sheets from the Kelmscott Press Chaucer. These were sent to The National Library of Wales in 1926 by May Morris. The accompanying letter refers to them as "retree". This is often used to indicate some fault in paper or vellum, but in this case they are perfect and merely surplus, spare copies. Also in the letter, May Morris refers to a friend, a Mr. J.D. Morgan, who seems to have been instrumental in her decision to donate the material. There is another short note attached to the letter, addressed to John Ballinger, the Chief Librarian at the time, from a friend of his in Cardiff, a bookseller named Joseph Jones. His note states that but for the intervention of J.D. Morgan, the retrees would have gone to another institution, though he doesn't say which, and that the "...Hitherto unknown friend of yourself and 'The National', J.D., stands well in certain circles and could prove a useful friend."

Sir John David Morgan was a leading figure in The Labour Party in Wales. He was also a businessman, running Morgan & co which dealt in wholesale footwear. He was knighted in 1931, when his close friend Ramsay MacDonald ( who also attended the opening of The William Morris Memorial Hall in Kelmscott ) was Prime Minister. He was known for having artist friends, and lived in a house in Rhiwbina, Cardiff, which he named "Kelmscott". It is possible that through his involvement with politics and the Arts, "J.D." knew May Morris quite well. He is the second Morgan to surface during my research. The other is Dr.Rhys Morgan, a friend to Miss Lobb and May, as well as being their local G.P. In fact, he was one of the very few people named in Miss Lobb's will - she left him her collection of pewter tankards and all her copies of The London Illustrated News!   He is no relation to "J.D." as far as we can tell,  but he is quite an interesting character and I'll return to him at a later date.

There have been other bits and pieces turning up around The Library lately too.  On the original inventory of items in the bequest, there is mentioned a box containing, "...some thousands of loose items...". These were described largely as topographical prints, cuttings, postcards etc. Some of these have started to resurface bearing an identifying stamp. Miss Lobb's legacy is lurking in every corner it seems. I was helping a colleague in their search for unusual items hidden in The Library, when I stumbled across a set of picture postcards bearing the same stamp! 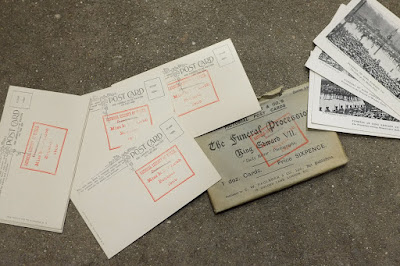 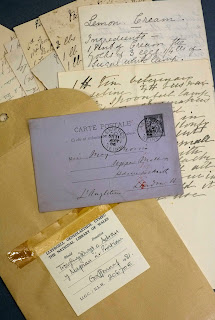 But I think my favourite recent find has to be a small bundle of papers brought to my attention a couple of weeks back. A  colleague stopped me one day and informed me that he had found a postcard addressed to May Morris, with miscellaneous other items. They had been removed from the Pictures and Maps Department back in 1981, probably during a clear out to make way for refurbishment. It is possible that they also came from the box of loose items on the inventory, but I think it more likely that they were removed, or fell out of, one of the scrap books or photo albums in the collection. 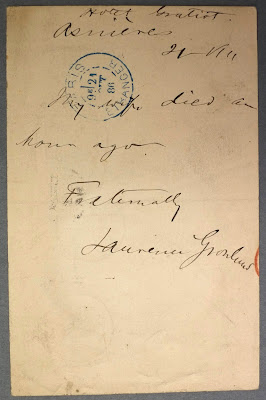 There is a postcard, not a picture postcard, sent from Paris, dated August 1886 and addressed to May in Hammersmith. The message written on it is simple and dire: "My wife died an hour ago".  It is signed by Laurence Gronlund, political writer, lecturer, and activist, best known for his work, "The Cooperative Commonwealth". He was Danish born, and after living in The United States for over 20 years,  he travelled to Europe in 1885, returning to America in 1897. It seems that he lost his wife, Beulah, en route, and that the couple must have been friends of the Morris family, in particular, May.


Another interesting item is a letter written by Trade Unionist and Politician, John Burns, to Henry Halliday Sparling, secretary of The Socialist League. May Morris married Sparling in 1890 and stayed together for four years, although they didn't divorce until some years later. Unfortunately the letter is undated, but judging by the content, I'm fairly certain that it was written in 1890. Burns mentions his ill health, and I have found a newspaper article (Dundee Telegraph, January 22nd 1890) reporting that, " John Burns is at present indisposed, his illness being brought on by overwork."  Yet, on 28th January he attended a meeting opposing the Compulsory Land Purchase Bill, which proposed the buying out of landlords in Ireland  ( Birmingham Daily Post 29th January ) and it seems that it is to this meeting that the letter refers. There is also mention of his being accused of misappropriation of funds by his political opponent, Henry Hyndman. Burns ends the letter asking Sparling to "send best wishes to Morris and folks at Kelmscott..."


Last, but not least, there are several small pieces of paper with recipes roughly hand written on them. They are recipes for, amoungst other things, mince pies and cheese cakes. Some of these bear the name Miss E. Vivian - Miss Lobb's mother, Emma. 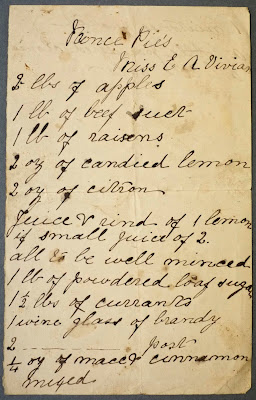 So, this was another orphaned fragment of the bequest. To anyone else, this would have appeared to be just a random pile of miscellanea, so I'm thankful it was brought to my attention by a diligent archivist. I can only speculate as to how it ended up "in the wild" as it were, for so long. My guess is that these items were loose in the back of a scrap book or photo album. Either they were removed deliberately, as is usually the way with ephemera like this, or they fell out and no one was quite sure where they should be. It doesn't really matter, it's enough that they have survived, and, for me, they epitomise the wonderfully disparate nature of this collection.
Posted by Evans The Blog at 19:26 No comments: