After declaring that I had found all I was going to find of Miss Lobbs collection, I found more!  A colleague pointed me in the direction of a cupboard, full of bits and pieces "to be sorted at some point", and luckily there were four more of the missing items. There is just one item still unaccounted for.

One of the new finds was the first item on the inventory, and I really thought it had been lost. It's an interesting "autograph album" from the 1840's. The sort of thing many respectable young ladies would have. It has various written contributions addressed to Miss Ind, the owner of the book, as well as some original drawings. However, what is most interesting is that inserted between pages throughout the volume, are leaves from various trees, and many (I haven't counted them yet) orange wrappers! We tend not to see them much these days, but most oranges, and some other fruit, used to come individually wrapped. I think you still get satsumas or clementines wrapped like that sometimes.  This is the sign of Miss Lobb at work! The leaves too, were almost certainly put there by her. Some of them are in the same place as the orange wrappers and they have left an impression indicating that they were put there at around the same time. The wrappers themselves are all of the same brand, though I have found one of a different kind in a seperate volume. Why she was so fascinated with these things we may never know, but they were mentioned in the original inventory of the bequest as part of the contents of a box containing "some thousands of loose items..cuttings, prints, drawings....  A variety of illustrations etc. from Christmas cards to paper wrappings of oranges".

Greetings cards feature quite heavily in this collection. Some appear in scrap books with used cards stuck down, sometimes with the names of senders written underneath. Most unusual though are the six trade catalogues, full of mint condition samples.  They are all Christmas and New Year cards from the 1880's. One, from 1881, containing aprox 250 designs by H.Rothe. Herman Rothe, had premises in Covent Garden, publishing Christmas cards from 1874 - 1890s. There is one from T.H. Dupuy & Sons of Paris containing about 230 designs, a volume from another French company – Bouvetier, Paris, some from G. Greinner & Son, London, and a couple of other volumes containing a mixture of British produced designs. Most of these volumes even still have the original trade price lists attached. It seems that Miss Lobb was an avid collector of such miscellanea. There are several receipts from antiquarian booksellers with her name on them - a couple at Kelmscott Manor and one I have found at the National Library. Though, why she would buy something like the rather nice, antique autograph album and then proceed to stuff it full of orange wrappers and use it as a flower press, is beyond me!

However what she has left us is a great insight into the Victorian era, and quite bizarre it is too. Some of the Christmas cards seem decidedly unseasonal to say the least......

As you can see, some of these have a somewhat ambiguous meanings. Personally I find them rather amusing and surreal, but I'm sure there are many who would find some of these anthropomorphic vegetables almost disturbing! 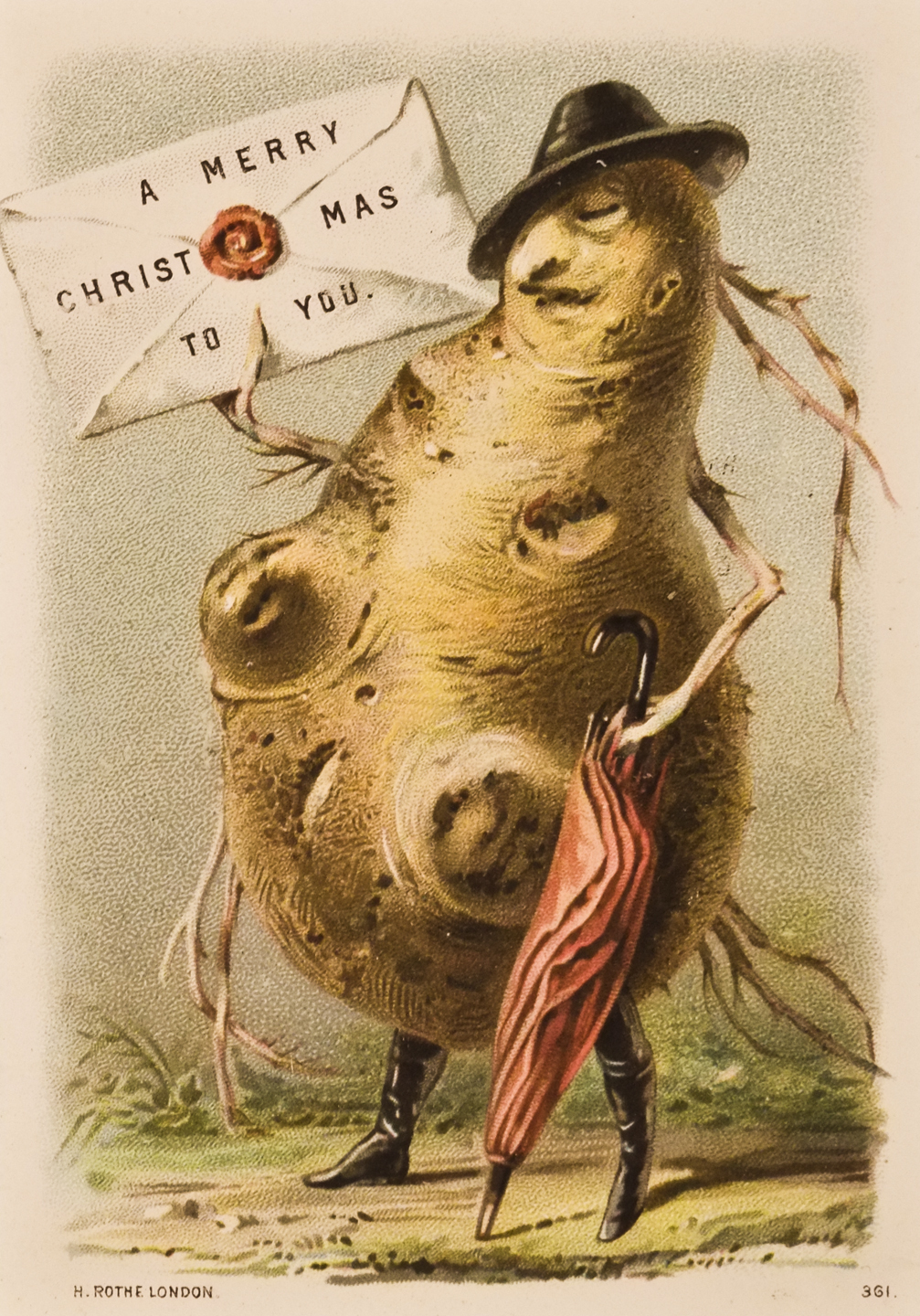 Its hard to tell if these kind of designs, and there are many, many more, were supposed to have any kind of meaning or message. They were probably simply meant to amuse, much like "nonsense" verse, and fantastical stories like Alice in Wonderland which were emerging at the end of the 19th century.
I, for one, have always thought of the style of our Christmas icons as having originated with the Victorian era. These days, you can't buy a Christmas card that doesn't have the usual ingredients of snow, a christmas tree with presents, Santa, or the nativity and big shiny stars. But, although there are some snowy scenes, I haven't seen any Christmas trees, very few Santa figures and, perhaps most surprisingly, out of the several hundred designs in these catalogues (ranging 1879-1890 and five different companies) I have only seen four which specifically show the Nativity. Most are pastoral scenes with flowers, or seascapes, cherubs, strange vegetables, butterflies, birds (including many tropical species and the occasional dead Robin, yes, dead Robin!) and many child-like caricatures.

Of course, these are catalogues, not all the designs contained therein would have sold well. Some may not have survived into the following year. Although feeding the Victorian love of novelty, and, indeed, being rather amusing to us now, in the development of Christmas icons, most of these were evolutionary dead ends.