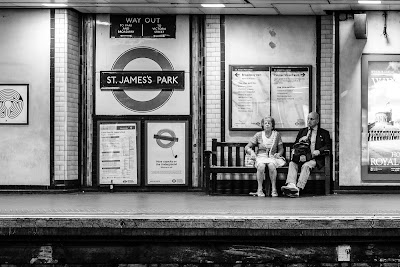 I don’t often venture into The Metropolis. Being a country boy, I’ve always found it all a bit overwhelming. There’s so much going on, it’s too, well, busy. But, of course, despite it’s down sides (and for me, there are a lot of those) the city has many marvels to behold. When The Lovely suggested that we take The Small One (not quite so small any more) into London to visit the museums, various landmarks, and to see a show, I was happy to go along.

We were travelling in from Broxbourne where The Lovely’s parents live, some twenty minutes by train from the central London.  Apart from my general discomfort with the crowds and the searing summer temperatures, everything went very smoothly. I've often heard tales of rail chaos, delays, cancellations and angry commuters, but, even on previous work related expeditions, I'd seen no evidence of this. We'd travelled all over the city centre, hopping on and off the tube with relatively little stress. I was actually becoming quietly impressed by how well it all worked, as well as enjoying taking photos of my fellow passengers.

Later in the week, when the rainy weather set in, The Lovely and I decided to take a look at The William Morris Gallery in Walthamstow. A simple, short journey from where we were. Catch the train at Broxbourne, grab the Victoria line tube at Tottenham Hale and on to Walthamstow Central. Easy. We got there without a hitch and after an enjoyable afternoon, began our journey back.

Our timing was slightly out. It was around 5pm, so I was preparing myself for a fairly hectic, but thankfully short trip back. The station at Walthamstow didn’t seem too busy. So far so good. Then, as the tube train lurched forward, an announcement rattled out of the speakers. It seemed all trains from our connecting station at Tottenham had been suspended. Signal failure. This kind of thing is not, so I gather, a particularly rare occurrence, so, apprehensive, but still quite calm at this point, we disembarked in an attempt to get more information.

All trains had been diverted to the Seven Sisters station, and by the time we reached there, the confused crowds were already accumulating on the platform. A couple of officials were being swamped with questions, and I could see people turning away from them in disgust, amid much muttering and head shaking. When we got closer, we could hear the reason for their despair. It seems we had been misinformed. We had to go back to the station we had come from. So, back on the tube. 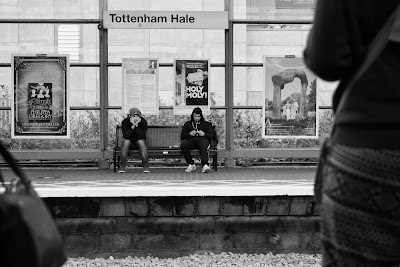 The main platform was heaving. Across the tracks, only a handful of people sat, occasionally glancing dispassionately at the ever growing, frustrated hoards of travellers. We waited. We waited a little more, and the whole time more and more people arrived. The P.A. system squawked into life and we were informed, very apologetically, that we had to go back to Seven Sisters. Again. Now, my stress levels were rising.

As we stormed back to the tube once more, I passed a large American man, dripping with sweat, hauling a massive suitcase. He was shouting loudly at an official about how "Unbelievable" this was and what the hell was he was supposed to do, he had a plane to catch, and so on. Further on I passed another official manning the gates as we all tried to pile through, she was nearly in tears as she tried to explain and appologise to the more irate amoungst us.

So, off the tube at Seven Sisters, again. Up the stairs to the platform which by now was uncomfortably congested. The usually loud, piercing announcements seemed like whispers, lost in the constant mumble of the anxious crowd, but we learned that all the diverted trains would soon start arriving. Sure enough within a few minutes a train squealed to a halt and the doors opened to reveal the already packed carriages. It was plain to see that just a tiny fraction of those waiting stood any chance of actually getting on. Despite the obvious futility, we all lurched forwards. I found myself muttering, "No way....No way...", and my stress levels peaked. I felt the beginnings of sheer panic rising in me, and I rapidly backed away, fighting my way out of the densest concentration of desperate would-be travellers. 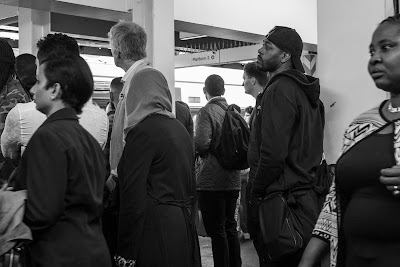 I found myself in a corner, some way back from the platforms edge. There was a small space around me. I could breathe. The Lovely had stayed in the crowd, trying to make sense of the announcements which may give some clues as to the next train we might catch. I watched as people approached up the stairs, many blissfully unaware of what was ahead of them. They would round the corner and their faces would drop. There was a difference between the local, regular commuters and those, like me, who had never experienced anything like it. The regulars were pretty stoic. The despair flashed across their face and was gone. They would just sigh or roll their eyes and get on the phone to calmly inform their loved ones that they would be delayed. Foreign travellers or those unfamiliar with London retained the look of despair, constantly looking around for someone or something to inform them what to do next. Then there were people like me, who just wanted to hide in a corner until it was all over! 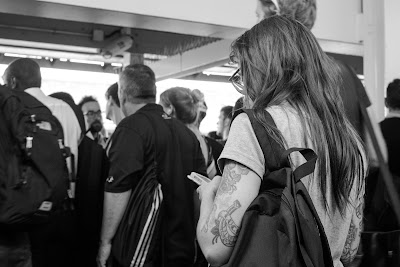 Finally, a train turned up into which we could actually fit, just. We were all pressed in tight with hardly an air gap between us, standing as still as one can as the train jogs and lurches about. It was hot, uncomfortable and claustrophobic. About as far from my comfort zone as I could get! When we eventually disembarked, what should have been a 20 minute hop had taken about 2 hours.

I thought the daily rush hour could be bad! Having seen what happens when it all goes pear shaped, and knowing that it does so quite regularly, I don't know how anyone copes. Through my eyes it seems like a kind of hell, torture, and I wouldn't last very long at all if I had to live like that on a daily basis.

So, you commuting Londoners, and the ever suffering Underground staff, I salute you! 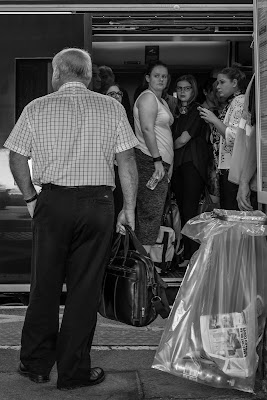