Love Venice, Hate Being A Tourist.. 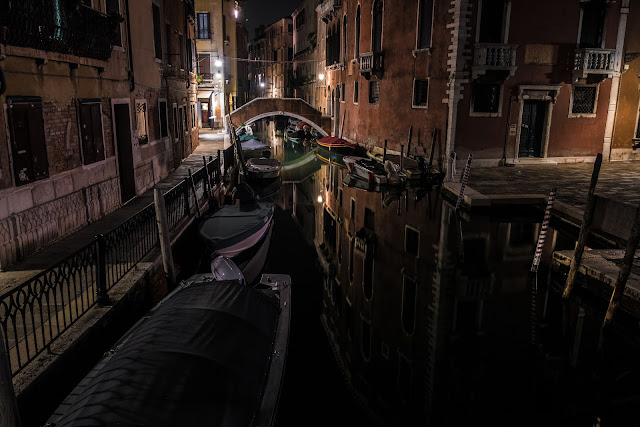 I hesitate to attempt writing about Venice, and as a photographer, it’s a challenge to produce images that are vaguely original. So many people have done it, and probably in a more competent and informative way than I can muster.  Looking around for meaningful quotes led me to several which express a similar sentiment. American writer Henry James, writing in 1882, probably sums this up best ;  "....I am not sure there is not a certain impudence in pretending to add anything....There is notoriously nothing more to be said on the subject. Every one has been there, and every one has brought back a collection of photographs."

So, that's that then.

Well, no. I may not be overly good with words, and I sometimes struggle to create the images I want to, but I feel the need to express....something.... I suppose that's one of the things Venice does to you.

Photographically, I knew I’d be faced with endless opportunities. I tried to avoid the usual and the clichéd, but it turns out to be almost impossible. There's something striking, but slightly familiar around every corner – The sun reaching down through the high, narrow spaces at various angles, lighting up the cracked and crumbling buildings on it’s way to illuminating the greeny-blue water below, which ripples and sparkles as the bow of a Gondola, almost silently, cuts through the waterway. See what I mean – cliché!  Don’t get me wrong, I love it. It’s all gorgeous and textured, captivating and evocative, and a lot of the time I found myself just standing, staring with a daft smile on my face. However, as much as I find the sunlit city a feast for the senses, for me, there is just as much magic in the hours of darkness.

" In the glare of the day there is little poetry about Venice, but under the charitable moon her stained palaces are white again…” Mark Twain.

Wandering the alleyways and bridges in the dead of night is an absolute pleasure. It becomes a different place entirely. The crowds disperse. You still see people, mostly with map in hand, looking for street names, but it's so relaxed, so quiet. There is no constant drone of distant traffic because, of course, there are no cars. Occasionally the silence is broken by a lone late water taxi, or even some local lads cruising with bass booming sound systems. But the sound is soon dulled by walls and water as the boat disappears off into the labyrinth, leaving just the liquid lapping noises along the edge of the canal. Even the crazy crowd hotspots of Rialto and San Marco can be almost deserted, allowing a leisurely look at some of the architectural wonders without having to dodge the backpacks and selfie-sticks.


Light spilling out of doorways and windows creates soft,
coloured mozaics in the dark waters with their reflections.

I love photographing people. Like most cities, Venice provides plenty of opportunity to capture some of the local faces, especially around Rialto Market. After around 9 a.m. the place begins to heave with shoppers and sightseers alike. I saw guided tours coming through there, groups of up to 20 or 30, possibly from one of the giant cruise ships docked out near Tronchetto at the western end of the city. They're all baseball caps and Nikon DSLRs, which are as ubiquitous now as the old Box Brownie was in Edwardian times. 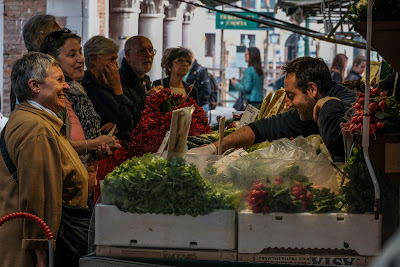 Most locals get their shopping done early, in an attempt to avoid the mass of onlookers parading along the market stalls.

The loading and unloading of fruit, vegetables, mushrooms, and fish goes on most of the morning. 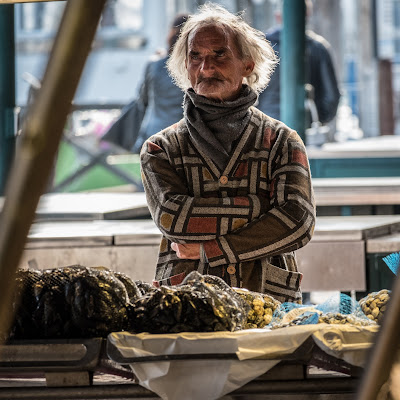 It seems that at markets all over the world, there is always at least one old chap who comes to watch. This man stood for almost an hour in the same spot, every now and then he would survey the stalls of fish with owl-like movements of his head. Eventually he moved in to buy a handful of shrimp from one of the fishmongers. He then stood back in the same spot and devoured them there and then. 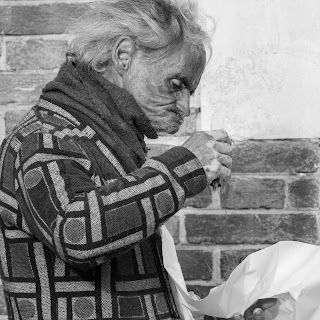 At one point a group of guided tourists flowed past him as though he were a permanent fixture of some sort, like one of the pillars of the building itself. They seemed oblivious to his presence, and he to theirs. It was almost as if they passed straight through him, like a ghost.


" Though there are some disagreeable things in Venice there is nothing so disagreeable as the visitors.” Henry James,1882 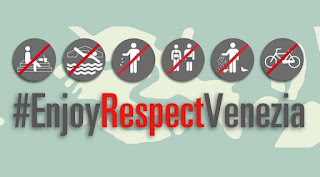 Venice gets in the region of 20 million visitors a year. This is a city of just 55,000 residents. The authorities are trying to minimise the impact with their "Respect Venice" campaign with, it seems to me, limited success. I still saw plenty of people doing exactly what the posters ask them not to. If the number of residents continues to drop, there is a danger that the city, as a living, breathing, working city will just die long before  it's in danger of sinking far below the waves.

Of course, the numbers have been swelled in recent years with the arrival of more and more huge cruise ships. In the high season the city can registers upwards of 20,000 passengers coming ashore per day!  There have been some changes in the routes taken and in the maximum size of ships allowed, but the debates over environmental and economic issues still rumble on.


I so wanted to see this place. It's one of those places on the 'must see' list, and I absolutely love it - the architecture and the art, it's people and it's history,....But I kind of hate being a tourist! I am well aware of the strain the city is under, the sheer numbers of people and the effect that has on the residents and the functioning of the city, so I feel slightly schizoid about this. On one hand I don't see why I shouldn't experience the place, but on the other there's the slight creeping guilt at being a part of the problem.  In the end I think you just have to go, treat the place and its people with respect, be humbled by it all and soak up as much as you can of it's utterly unique atmosphere.

More photo's in this ALBUM on Flickr, which at the time of writing is still growing!