A Visit To Kelmscott

Well, so much for me writing more regularly! I'm not sure where all those tweeters and bloggers out there, find the time to consistently produce such prolific output!

Anyway, so I finally got to visit Kelmscott Manor. A very nice weekend spent with The Lovely, who, it has to be said, paid for our room and board at The Plough Inn, just down the road from the Manor.
I have been working on a little research project which connects a collection at work, in the National Library, to Kelmscott. Before I go any further, I shall repeat, and possibly slightly enhance, a short blog I wrote for work outlining what I have found.

The Farmer, The Artist, The Princess And The Tzar

There is a small collection which first came to my attention last year, bequeathed to the Library by one Miss Mary Lobb. My attention was first drawn to some images of what appeared to be quite rich 19th Century tourists. One image was of two women looking out of a window, shot into the light, making it almost a complete sillouhette. 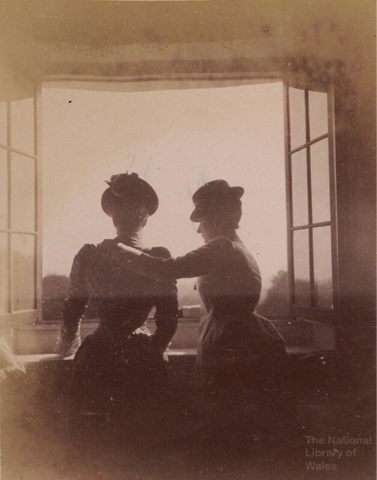 The intimate, relaxed nature of this, and other images, made me curious. Was Miss Lobb, who’s bequest this was, the photographer?
Well, as it turned out – no. She and her collection turned out to be far more interesting than anyone had previously realised. 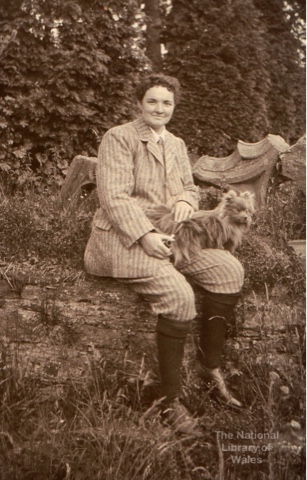 Miss Lobb in her younger days.

Mary Frances Vivian Lobb, was originally from Cornwall. During WW1 she joined the Land Army and was posted to Lechlade in Gloucestershire. She was a formidable character, and had very soon upset the local men, who wanted her removed from the farm. Close by was Kelmscott Manor, home to May Morris, the youngest daughter of designers and artists, William and Jane Morris. She took Miss Lobb on as a helping hand and they remained friends for the rest of their lives.
Digging deeper I found that the 17 items attributed to Lobb in the catalogue, were only a fraction of the bequest, which originally consisted of 98 items. Scrap books, photo albums and postcards, some from her family and some, clearly from Kelmscott Manor. There are several watercolours by May Morris, many designs and test pressings of illustrations, decorative borders and typefaces from the days of William Morris' Kelmscott Press.
Most mysterious is the photo album which originally caught my attention. It took some time to work out, but it has been confirmed that it contains “snapshots”, from around 1895, of a gathering of Royal Families in Denmark. These include, Alexandra, Princess of Wales who probably took some of the photographs. Her sister Marie Feodrovna is shown with her husband Tsar Alexander III and children, Princess Xenia, one of the few Romanovs to survive the revolution, and Nicholas who would become the very last Russian Tsar.  How this album came to be in the possession of Miss Lobb, we might never know. 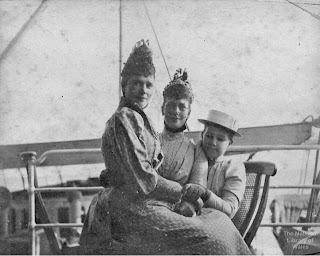 Here we see Marie Feodrovna (formerly Princess Dagmar of Denmark), her sister Alexandra (soon to be Queen of Britain) both sitting on top of their niece Marie Georgievna of Greece.

I have continued to dig and delve into this collection, slowly finding all the items in the bequest and doing my best to see what is there altogether.  The above blog was spotted by a student from Oxford University who was doing their internship at Kelmscott Manor. She was very interested in what I had found, particularly as no one seems to know a huge amount about Miss Lobb herself beyond the scattered tales and anecdotes recorded by locals and visitors to Kelmscott. Miss Lobb is a much maligned character I think. However, as I've looked at her past, her family and the collection she left to the Library, I've become quite fond of her!  With the help of my Firstborn, who has grown into a fine genealogist also working at The National Library, we now know quite a bit about her family history. With what I've found in the collection, I can probably say more about Miss Lobb than anyone else. Who'd have thought it!
So, the next step was to talk to some people at Kelmscott, hence the visit. With a little luck, we are hoping to manage some kind of collaboration in the form of an exhition and general sharing of information. It will certainly mean another visit, which will be rather nice. But I get ahead of myself.... How did this visit go? What did I think of the place?   That might have to be the subject of my next posting....